Home The Night Show Innovative Tech at the 2023 CES 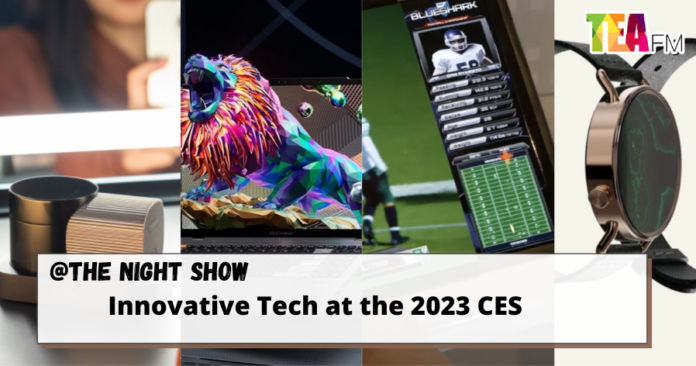 Luke Evans reveals his thoughts on being the next James Bond

One of the biggest technology events or conferences of the year has to be the Consumer Electronics Show. It is where the most exciting and groundbreaking tech innovations are being shown to the whole world.

One tech that caught the attention of many at the 2023 CES is the Nowatch smartwatch. Invented by a Dutch company, the Nowatch is described as an “awareable” rather than a wearable. So this smartwatch can track your breath rate, heart rate, body temperature, blood oxygen level, movements and skin conductance but there’s one thing it can’t do and that’s telling you the time. The display part where it’s usually the timepiece is replaced with a slab of gemstone instead. You still get to track the features I mentioned above by downloading an app and tracking them from your smartphone. As for the display part, if you don’t like the gemstones, you can opt for just a minimalist disc. The Nowatch is priced at RM2500 per watch.

So if you’re thinking that flip smartphones are the new innovation for smartphones then think again. Korean tech giant Samsung unveiled its futuristic shape-shifting table called Flex Hybrid and it’s the next gen of electronic devices. Not only does this tablet fold but it has a small section that can slide inwards and outwards giving users an extra few inches. The display size of the foldable tablet can be expanded to 17.3 inches for multitasking purposes, playing games or even watching movies. While this new design is only a concept, the company said this is a glimpse into the future of displays. Who knew that the next part of the foldable tablet is sliding. Genius!

3D technology has been around for quite some time, probably around a decade long and the next part of 3D tech is using Augmented Reality. However, Asus has a totally different approach. Instead of developing a new AR glass, they developed the world’s first glasses-free 3D OLED display. In other words, you will be able to see lifelike images from your computer screen but out of the screen. It’s like a holographic image. This technology uses an eye-tracking camera system that constantly orients the 3D images based on the user’s position, even if they’re always changing their viewing position. From the concept video, it looks so cool, imagine watching an ocean documentary for example and the dolphin will literally leap off the screen and project right in front of you, how cool is that.

As you grow older, you’d realise the importance of taking care of your appearance, or you might be those who don’t care about those. And if you do, then eyebrows are an essential part of your face. Without them, we’d all look weird and well, just weird. Loreal has introduced a new make-up device that combines printing and AR technology. The device named Brow Magic has been developed in a partnership with Prinker and it overlays different AR eyebrow options on the user’s face so they can see which one suits them better. And after that, just sweep the device across your eyebrow section and done! Your eyebrow is as good as new. And if you feel you don’t like it, no worries, it can be removed easily with makeup remover. Now, this is going to drive make-up gurus and make-up enthusiasts crazy.

And those are some of the innovative tech revealed at the 2023 CES. Which one do you like best?