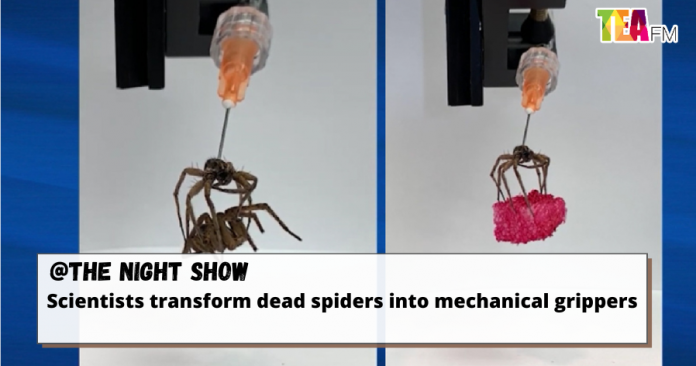 This is a rather scary science news. If you’re afraid of spiders, this is gonna make it worse because researchers from Rice University in Texas have found a way to turn dead spiders into mechanical gripping robots. In other words, zombie spiders.

The researchers call this necrobot where they pumped wolf spider cadavers with air to get their legs unfurl and to clasp around objects. It was reported that the dead spider can grip and lift objects up to 130 per cent of their own body weight and can also manipulate circuit boards to turn off LED lights. And each dead spider can be used for about 1,000  open-close cycles before the joints start to wear out, but the researchers believe it will last longer with a polymer coating. In the future, they hope the necrobots can be used in microelectronics or for capturing small insects to study.

Well, spiders could only be the beginning, perhaps, one day, scientists can manipulate any creepy-crawlies cadavers and that would be a nightmare!